In the midst of life we are in death.
Earth to earth, ashes to ashes, dust to dust.
Book of Common Prayer, Burial Service

He carried the news gently in his mouth. I took the gift from between his soft lips and mourned. The black retriever had scooped the lifeless, winged thing from under the bird feeder.

The night before I stood on the glider and peered into the nest, hidden in the leaves. Two naked heads with open beaks peeped softly.

We discovered the nest, while trimming the trumpet vine, which covers the trellis around the patio. We put down our clippers and traded gardening for bird watching. For the past three weeks we delighted in the cardinal couple and their chirps and whistles. They took turns guarding and sitting on the nest and often perched on the trellis or on the glider under the vine.

We glowed under the blessing of their nearness. I wanted to see the youngsters learn to fly. Did a blackbird, blue jay, or that bold squirrel, who kept coming up close to the patio cause the tragedy?

I was going to write a blog about the fruitfulness of summer. Instead I buried the bird in the garden next to the zinnias and wondered where the cardinals had flown and how they were doing. I hope they begin again in a safer place than my backyard has proved to be.

It has been a tough week. A seventeen year boy was killed in a car accident. A family gathered to remove life support from their beloved. A woman, whose organs have begun to shut down, makes a last journey home to be with family. Twenty seven people die in an Afghan hospital when a bomb explodes. In Minot, North Dakota, the Souris River rises to snatch its prey – over 4000 homes flooded, eleven thousand residents have evacuated.

So I say look while you can. Pour out the precious oil of your loving attention on what is before you. Allow yourself to be anointed ahead of time for the deaths you will witness and mourn, including your own. Hold your dear life close with open arms. You can always trim that trumpet vine later. 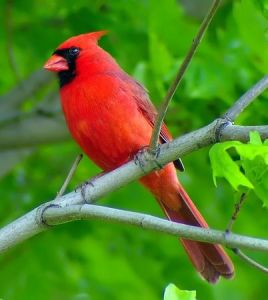