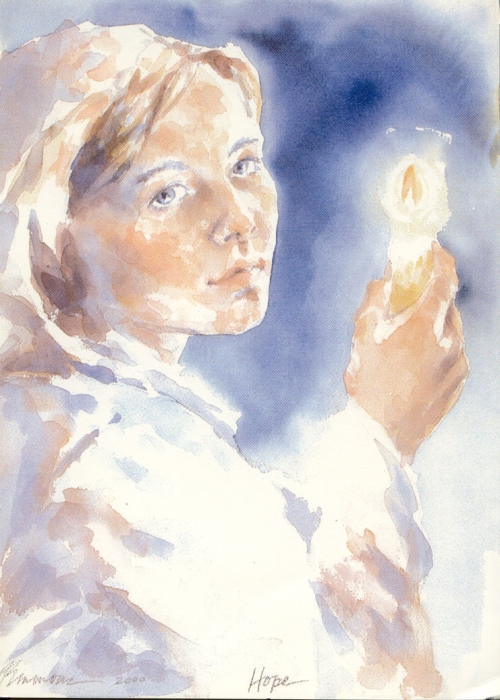 Hope is what gets a lot of people through the Christmas season. And the failure of hope is what leaves some souls shipwrecked on the treacherous rocks of the sin and imperfection of this world.

What is it for you this year? Death of a loved one? Spouse in Afghanistan? Unemployed? House foreclosed? Cancer?

Hope is the presentiment that the imagination is more real, and reality less real, than we had thought. It is the sensation that the last word does not belong to the brutality of facts with their oppression and repression.  It is the suspicion that reality is far more complex than realism would have us believe, that the frontiers of the possible are not determined by the limits of the present, and that miraculously and surprisingly, life is readying the creative event that will open the way to freedom and resurrection.  Rubem Alves

She was fourteen. She sat next to me as we drove home after the Christmas Eve service. Lights sparkled from distant homes across the snow covered fields. Shattered with pain and trying not to show it, I tried to focus on driving. After a while she spoke out of the darkness, “Mom, things aren’t ever going to be the same, are they?”

That year, our family had been struck by a blow from which we would never fully recover. In spite of  brave efforts, prayer, and sacrifice we could not put back together what was broken and, perhaps, fatally flawed.

During that season of suffering, hope became nearly eclipsed by fear, anger, shame, and pain. Each evening I turned briefly from my grief in defiance of “the brutality of facts with their oppression and repression,” and lit a candle for hope. Even though I felt no hope, I let the candle hold my hope for hope.

In those days I clung to the verse of scripture the minister preached at our wedding. Remember thy word to thy servant in which thou hast made me hope. This is my comfort in my affliction, that thy word gives me life. Psalm 119: 49-50 What an odd text for a wedding, you may think. Yet as the years unfolded it became more and more meaningful. I prayed it, holding God accountable to the goodness promised to me in scripture and whispered to my soul. God’s promise of joy, peace, and love comforted me and gave me the ability to keep breathing in my affliction.

Carmelite writer Constance Fitzgerald writes about the movement in our spiritual journey from “naïve hope to theological hope.” Through experiences of loss and suffering, naïve hope in a Santa Claus god and other illusions nurtured by our egos give way to a different, richer kind of hope. We let go of placing our hope in our own efforts, our own goodness, our own “luck” or deservedness. We let go of our “right” to ourselves and our way. Or perhaps it is more accurate to say, we numbly watch our way wrenched from our grasp. We face our helplessness and the truth that we are not in control. Hope in oneself and one’s little plans and projects dies on the cross of our life experience.

It is there in that stillness of a drive back home on the worst Christmas Eve in one’s life, while a child’s heartbreaking question hangs in the air, that hope in God is born.

You may miss it at first, especially if the pain is choking you. But refuse to let the last word be the brutality of facts. Go ahead and light that tiny candle. Defy the darkness. And pay attention. A baby is on its way. Something fragile and new and unimaginably sweet is making its way into your consciousness.

I tell my daughter, “Yes, honey, things will not be the same. But I believe somehow or other, things will be all right.”

Special thanks to artist Anne Emmons for her permission to use “Hope” in this blog. You can reach Anne at anneemmons_8@msn.com or on Facebook.

Here is Anne’s story about this painting:  I was trying to think of one moment in the Biblical narrative which captures the theme of hope.  Each year I have made a new image for Christmas since 1997, and in 2000, I was struck by the idea of hope as the source of light. The images in this series reflect the thought that Christ came, the Light of the world, into darkness. So I was thinking about one single moment in the story and I realized the moment Mary heard the announcement from the Archangel Gabriel must be the moment hope found a form, in her face. At the time, my daughter was almost 14, the estimated age of the Virgin Mary, and I suddenly connected with the story in a particular way. I kept her home from school that morning to have her sit for the painting. What struck me, and this has since been confirmed from other sources, most recently Anthony Bloom’s book, Beginning to Pray, was that the Incarnation was possible only through God’s will in union with the “yes” of the young Mary, who became the bearer of the Uncontainable God. Just after I painted this I saw the Pontormo Annuciation in a small side chapel in Florence, and Mary had the same sort of look of wonder I tried to catch.  Now my daughter Claire has a two year old son, Theodore. She is a single mother who said yes to the birth of this child, whose name she chose, not knowing it means “gift of God.”

Read more about prayer at www.fromholyground.org

Like Loading...
This entry was posted in Advent, Christianity, Christmas, Contemplation, prayer and tagged Grief, hope, Loss. Bookmark the permalink.

2 responses to “When Hope Fails”

What are you thinking? Cancel reply

This site uses Akismet to reduce spam. Learn how your comment data is processed.